I think my favorite types of grave markers are “tree stump” stones. For one thing they are rather rare. You don’t see a lot of them around. But what really gets me is how striking they are. They really are beautiful pieces of art. These stones were popular from the 1880s to the early 1900s. Here are two examples from Oakwood Cemetery in Syracuse. The photo below on the left is of Minnie Beard’s monument. The inscription “Francis & Duffy Syracuse” is found near the bottom of the stone, although it does not show up in this photo. Daniel J. Francis & Hugh A. Duffy were the proprietors of The Syracuse Marble and Granite Works located at 17, 19 and 21 W. Onondaga St. The business was founded in 1865 and as of 1885 it had between 15 and 20 employees. There was no carver’s name inscribed on the second stone to the right, that of Edward Augustus Putnam. 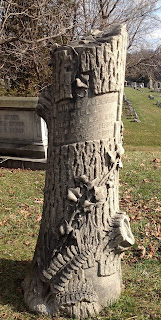 If you drive down Rt 5 in Elbridge heading west you’ll pass the Elbridge Rural Cemetery on your left. Not too far from the entrance to the cemetery is probably the largest example of tree stump artistry that you’ll find in Onondaga County. It commemorates the Millious family. The carver’s name and location, “F. O. Cross, Chicago Ill” can be seen on the bottom of the photo on the right. He was born and raised in the southern tier of NYS and moved to Chicago where he started carving stones. By 1890 he had moved to Indiana. 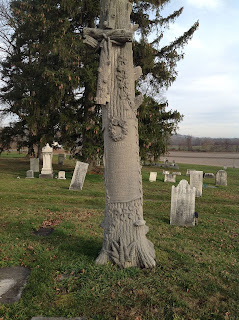 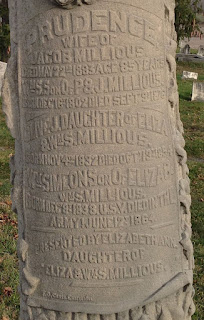 The above monument was commissioned by Elizabeth Ann Dibble, daughter of William S. and Eliza Millious. Other family members inscribed on front side of the monument include two siblings of Elizabeth Ann (Olive and William Simeon) and their grandmother Prudence Millious, wife of Jacob Millious. I can just imagine the feelings that Elizabeth Ann must have experienced as she waited in the cemetery for the arrival of the limestone marker. It would have been crated and shipped either by rail from Chicago or by water via the Great Lakes and the Erie Canal. Then at some point it was loaded onto a wagon and taken the remaining miles to the cemetery where Elizabeth Ann was waiting. As the workers broke open the crate and hoisted the monument onto its base, what an impressive sight it must have been. That is until Elizabeth Ann started reading the writing on the stone and realized that her grandmother’s death date was wrong! If you look closely at the dates you’ll see Elizabeth Ann’s father William S. was born on Dec 16, 1802, yet his mother Prudence died May 22, 1883 at the age of eighty-five years making her four years old at the time of her son’s birth in 1802. Searching for Prudence in Findagrave reveals a second entry for her. One entry is from Elbridge Rural and the other is from Redman Ground cemetery. The Redman Ground photo for Prudence has her death date of May 22, 1853 aged 85. Since the shape of the numerals “8” and “5” are very similar it is quite possible that the carver misread the handwriting on the order form and carved 1883 instead of 1853. Whether or not Prudence’s remains are in Redman Ground and the marker in Elbridge Rural is a cenotaph, or her remains were taken from Redman and reinterred in Elbridge Rural, I do not know.

The Town of Elbridge should be commended for the work they have undertaken at this cemetery. An impressive roadside marker dedication ceremony was held on Aug 10, 2013 to dedicate the new blue and gold marker for the cemetery. Over twenty-one revolutionary war veterans are buried there. I attended this event with a number of DAR and SAR folks. Elbridge Boy Scout Troop 52 started the ceremony by marching to the cemetery flagpole and lowering the present day fifty star flag and raising a thirteen star flag. After the pledge of allegiance was recited, town historian Jack Horner welcomed everyone and thanked all for coming. Syracuse SAR chapter president Bob Gang gave a speech and read a roll call of the veterans buried there. Representatives from several local DAR chapters also spoke. Town supervisor Ken Bush gave a speech for the dedication of the roadside historical marker. Among the hundred or so spectators a number of them were direct descendants of the veterans. Also present were two American Legion posts whose members fired a salute. The Jordan Historical Society had charge of refreshments.

Over the past few years, efforts have been made to refurbish some of the larger stones in the cemetery. As can be seen by the photo below, these monuments have been lifted, cleaned and new bases installed. Wouldn’t it be nice if all cemeteries were given the attention that this one has received! 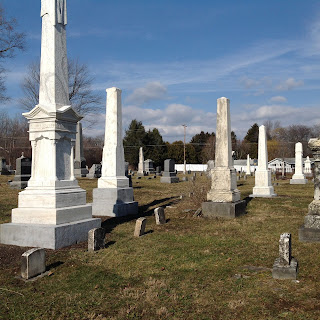 Posted by Nancy Maliwesky at 11:35 AM